The coach returned us to the Outspan hotel for breakfast, along with the party of Chinese who had spent the night at Treetops with us – sadly not an experienced to savour!  We were crammed into the coach with the last passengers to board standing or sitting on the floor, in the aisle.  Added to which we were unimpressed with the manners of the Chinese.  In contrast to those we encounter, almost on a daily basis, at home in the U.K., these were so rude.  When we arrived at Outspan they nearly knocked one of the waiters off his feet with their pushing to get to a table!

Breakfast over, we were reunited with Nicholas for the journey northwards to Samburu – reunited with our rafiki once more.  The journey took us down from the cooler Aberdare Mountains to the much warmer plains of Samburu.  At one point the road descended quite a long way, and in the process my ears popped!  However, from the top of the descent you could see the road stretching out in a straight line across the plains below.  Once again the road was vastly improved from our previous visit, with a smooth tarmac surface, until just before we crossed the river to the north of Isiolo. 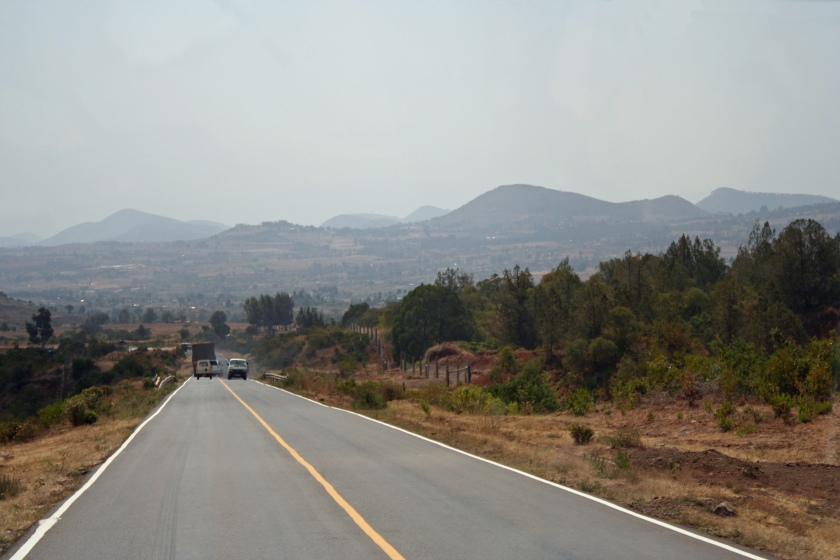 We left the main road at Archer’s Post and made our way to the Samburu National Reserve gates, where we spotted a ground squirrel and an antelope as we waited for Nicholas to complete the entry formalities.  The journey through the reserve to the lodge produced sightings of a variety of wildlife, including Gerenuk, Thompson’s Gazelle and Elephants.  One of the Elephants was wearing a radio collar as part of the project run by Ian Douglas-Hamilton and his daughter Saba.  Amongst other aims, the project is trying to understand where, and how far, the Elephants range in order to try to reduce Elephant/Human conflict.

On our arrival at Samburu Lodge we were taken to our room, No.57, on the opposite side to the reception block from where we stayed previously and looking out over the river.  The grounds were once again frequented by a variety of birds and other wildlife – walking back to our room after the afternoon game drive we were thrilled to see an Eastern Chanting Goshawk on a branch overhanging the path; while down by the river were Crocodiles and a pair of Monitor Lizards.

However, the afternoon game drive was the “mane” event!

There were plenty of antelope around including Dik Dik, Thompson’s Gazelle and Grant’s Gazelle.  We also saw a Mongoose.  Guinea Fowl were present in large numbers, as were Elephants, including several babies.  However, the highlights had to be the Lions!

We came across a Lioness who was definitely in “the zone”, focused on hunting, but despite Nicholas following her at a discreet distance, we lost sight of her as she went off into the bush.  A little further on we came across a bachelor group of three young males and witnessed some social interaction between them, with much head rubbing as they greeted one another.  They then wandered off to the riverbank, with us following close behind.  They lay down overlooking the river, with one of them wandering down to the water’s edge to drink, coming back up a while later. 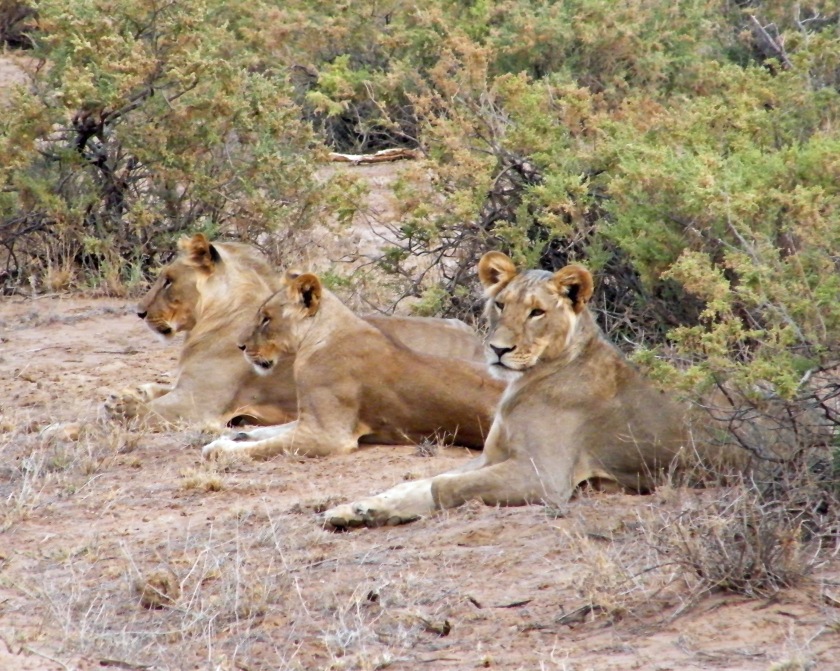 We moved on, and as we drove through the bush we spotted… …the lone female from earlier, but this time she was carrying a Dik Dik she had managed to catch, in her mouth.  We tracked her at a respectable distance to see if she would lead us to cubs, but she eventually sought refuge in some bushes to eat her kill.  Even without seeing cubs, we all agreed that we had witnessed some fantastic scenes. 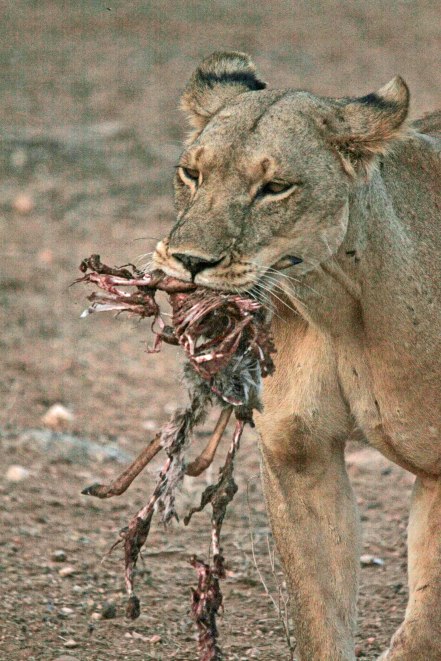 On our return to the lodge, as we turned in through the gate we saw a Genet Cat in the shadows under a bush, but this was not to be our only sighting of the Genet Cat this evening.  At dinner, not one, but TWO Genet Cats visited the restaurant!  One was on the path along the river, while the other was on the roof over the kitchen.

On the walk to the restaurant for dinner, we came out of our room to find three Kudu just the other side of the path from us.  As we walked towards them, we found that they didn’t flinch!  Talking to one of the security guards, he told us that two of the Kudu had been born within the grounds of the lodge and all three live there in relative security, hence their lack of fear of humans.

At dinner we were talking to the Manager and mentioned that we had stayed at the lodge previously, and how much we loved Samburu.  During the meal he asked me our surname and room number, the significance of which was not apparent at the time.

Our morning game drive took us across the river and onto the Buffalo Springs Reserve. As is the case with all game drives the wildlife present was unpredictable.  To us this is one of the attractions of a safari in Kenya – you know you will see something, but you don’t know what you will see, or where.

This morning there were plenty of birds about, as the sun rose as an orange ball into a clear blue sky, including some vultures riding the thermals as the air warmed up.  However, we saw very little else until we got deeper into the reserve.  Here we saw Oryx, Elephants, Giraffes, Zebra and several species of antelope.

We returned to the lodge for breakfast, and even then we were surrounded by the wildlife – as soon as the Samburu security guard’s back was turned, one of the monkeys dashed in, grabbed the sugar from one of the tables and made off into the trees to enjoy his plunder!

Mid morning, as the temperature continued to climb, we went down to the pool.  The pool itself was a welcome relief from the heat, and whilst swimming we saw numerous bright red Dragonflies skimming across the water.  As the day wore on the temperature increased to the extent that by the time we went out on our afternoon game drive we didn’t expect to see much in the way of animals until the heat started to dissipate.  However, it turned out to be an afternoon of surprises.

Close to where we had seen the three male Lions the previous day, we found a lone male Lion, older than the three seen previously.  He was  having a quiet snooze, until we turned up and he found himself facing a barrage of cameras from the wildlife paparazzi! 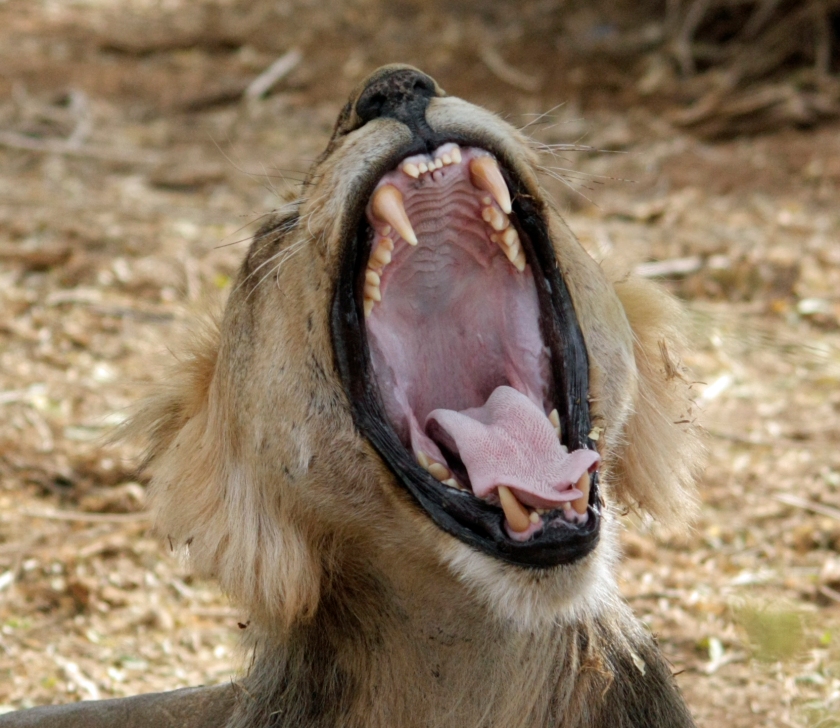 Next on the list was a male adult Tawny Eagle, which Nicholas and I identified between us, but only after much consultation of books.  Almost simultaneously, Nicholas was receiving radio messages and without further ado we set off, at speed, across the bridge into the Buffalo Springs Reserve and towards Elephant Bedroom Camp.  In the distance we could see several vehicles raising the dust as they too sped towards the same spot.  We arrived just in time to see an adult Leopard leap down from a tree and disappear into the bush before we could get any photographs.

However, within minutes another Leopard was spotted, asleep up a tree, just yards away from us.  We were able to get some excellent photographs as we drove directly underneath the bough the Leopard was lying on.  It was quite something, looking straight up through an open roof hatch at an apex predator asleep just above us! 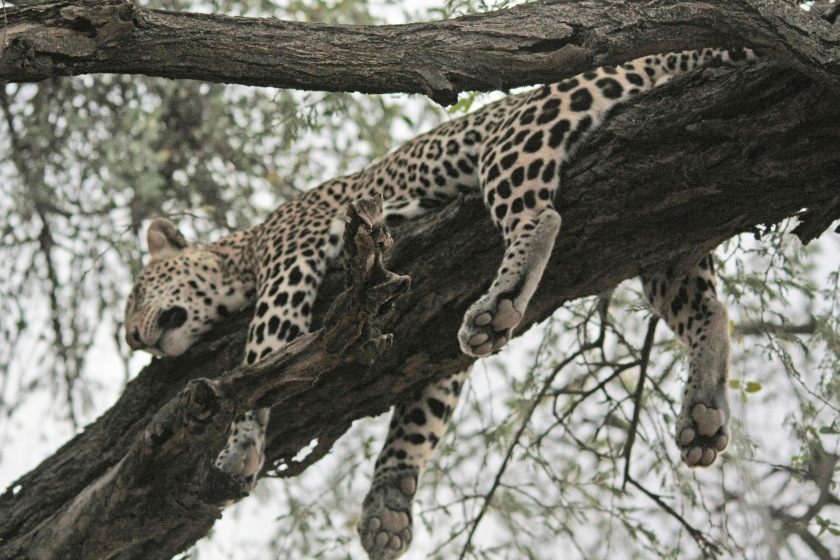 Having promised Nicholas a Tusker in the bar this evening, we started the journey back to the lodge.  Once again a flurry of radio and mobile phone calls saw us charging across the savannah to another “spot”.  This turned out to be a Cheetah, walking down the road!  When we came along, remembering its road drill, the Cheetah stepped out of our path, only to then flush out a rabbit – the rabbit fled for its life, with the Cheetah in hot pursuit!  Fortunately for the rabbit, the Cheetah failed to catch it and our last view of the Cheetah was it lying down, getting its breath back.

A Cheetah gets its breath back

As we drove back to the lodge there were six elated occupants in our vehicle – yes even Nicholas, who told us he never tires of witnessing nature in all its aspects as he goes about his job.  So far on this safari we had seen FOUR of the Big Five, with only the Rhino to go.  However there was one more surprise to come later that evening.

The bar at the lodge sits in an elevated position overlooking the river.  Some steps lead down to the river bank and from this position it is clear to see why the bar is built as it is.  Underneath, at river level, a gauge in the wall tells a story, a story of the owners’ constant battle with the force of nature, when the river, swollen with the seasonal rains, over tops its banks and floods the lodge.  Such has been the increase in river levels over the years that the gauge itself has been extended twice since it was first installed!  Just under eighteen months before our visit the flood waters had reached their highest recorded level, 3.55 metres, bringing the water to with a few centimetres of the underside of the bar floor!

The lodge is flooded on a regular basis

As dinner came to an end that evening, the restaurant staff emerged from the kitchen.  One was playing a guitar, while they were all singing “Jambo”.  They processed around the restaurant until they reached… …our table!  They gathered round the table as the manager, who we had spoken to previously and told how much we loved coming to Samburu, placed a beautifully iced cake in front of us.  On it was one word, “Kwaheri”, Swahili for “goodbye”.  The manager expressed the sentiment that while we were leaving in the morning, he hoped that we would return one day. 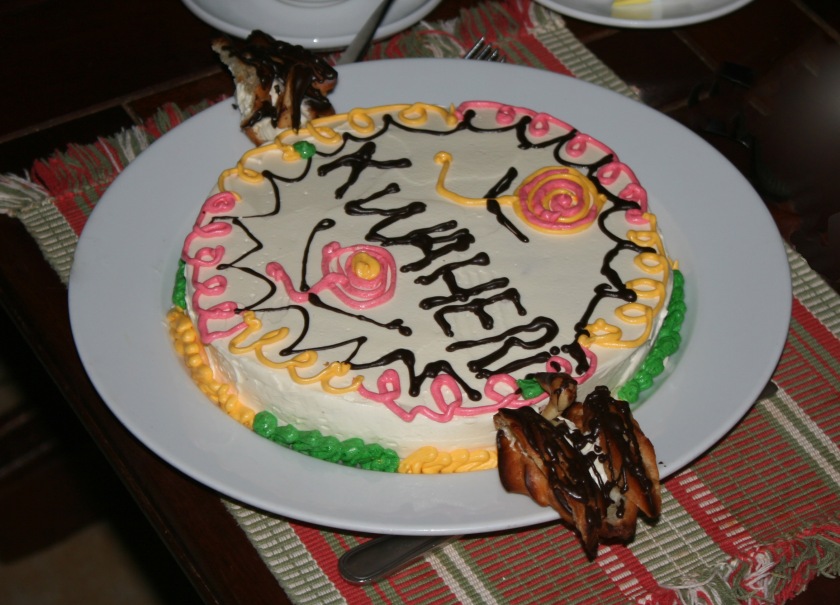 I am an amateur photographer with a passion for wildlife and for Kenya. Combine the two and the result is some unbelievable experiences, which I would like to share with you. View all posts by stevedaly697

This site uses Akismet to reduce spam. Learn how your comment data is processed.